The 0.87.2 update has just landed! It brings plenty of quality-of-life improvements and fixes to the table.

But before we will dive into what’s inside, please welcome our new full-time team member: @DarkMajesty 🎉

He joined us just two months ago and actually made this update real! While we continue working on long-term tasks like Rails and Roads Rework (also known as RRR) and Contracts Update, we finally have someone who can back us up and help to fill the void between those major milestones.

Alright, now let’s get back to business!

Device inputs and output directions are now predefined and can’t be changed. This should help new players, as well as raise some challenges to experience players when planning their setups. Let us know what you think!

We are still getting amazed by the creative ways you use decorations to build your beautiful worlds. To free your creativity even further, this update unlocks new degrees of freedom when placing your decorations.

The rotation is no longer fixed to 90° angles.

You can now scale decorations both up and down. 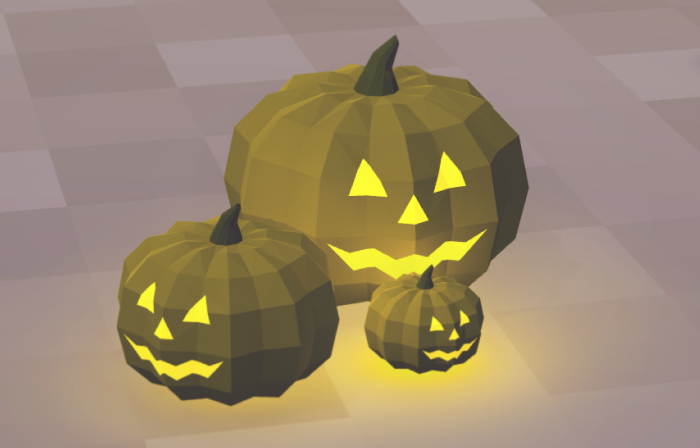 To help you properly align your creations, you can now change the world grid step in settings (10 by default): 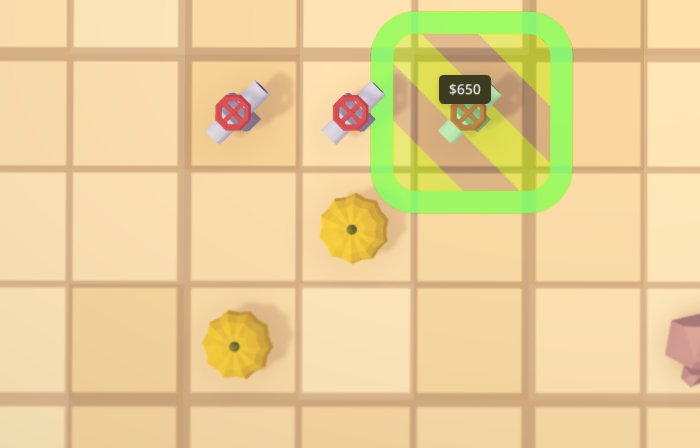 Many of you complained that option to rename cities was a bit pricy. We wanted to make renaming a city an achievement, but it become clear that many of you just want to name a city, not a big deal after all!

Also, our algorithm for deciding the price goes a bit crazy over time:

The exact amount of 'game dead' comments we receive every day

So, prices were greatly reduced and made more predictable. But don’t get too comfortable: one of the future updates will bring a company rating, and we plan to tie the ability to rename cities to the level of approval of your company in that exact settlement.

The game now properly supports trains consisting of both electric and steam/diesel engines. Before, such trains could not pass the non-electrified part of the tracks.

When you play with many mods, navigating the builder palette quickly become a complicated task. This is especially true for decorations:

To help you with that, we’ve completely reworked the builder palette.

Now, buildings are split into categories, which you can navigate on the left of the window. 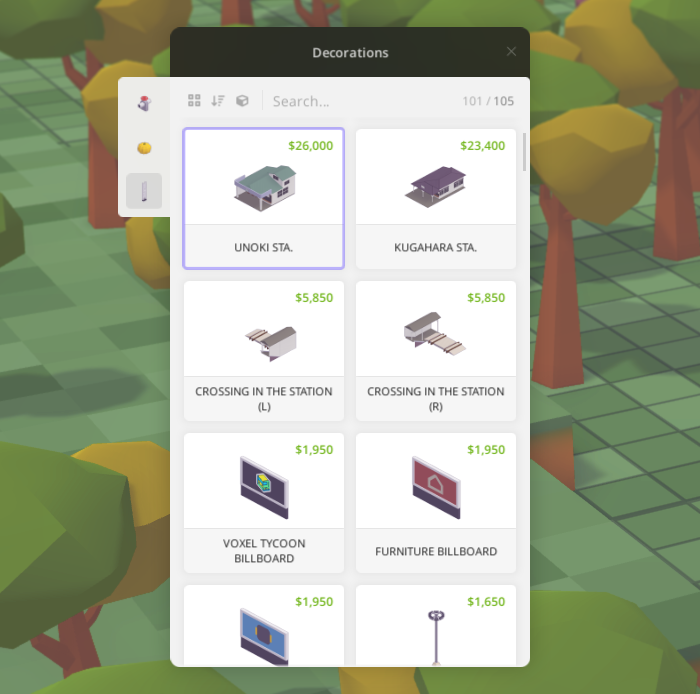 Modders can use built-in categories or create their own.

Buildings now can be sorted: alphabetically, by price, or by size. 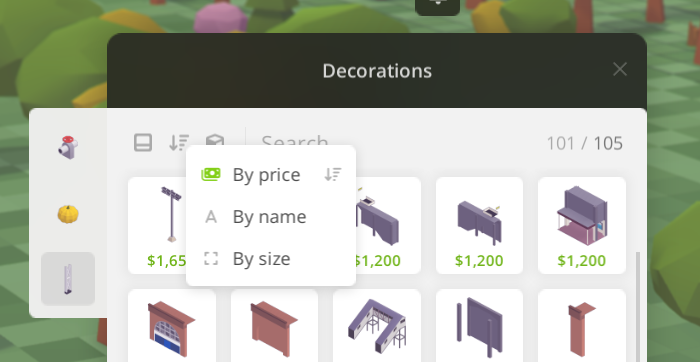 Or you can choose to display buildings only from specific mods. 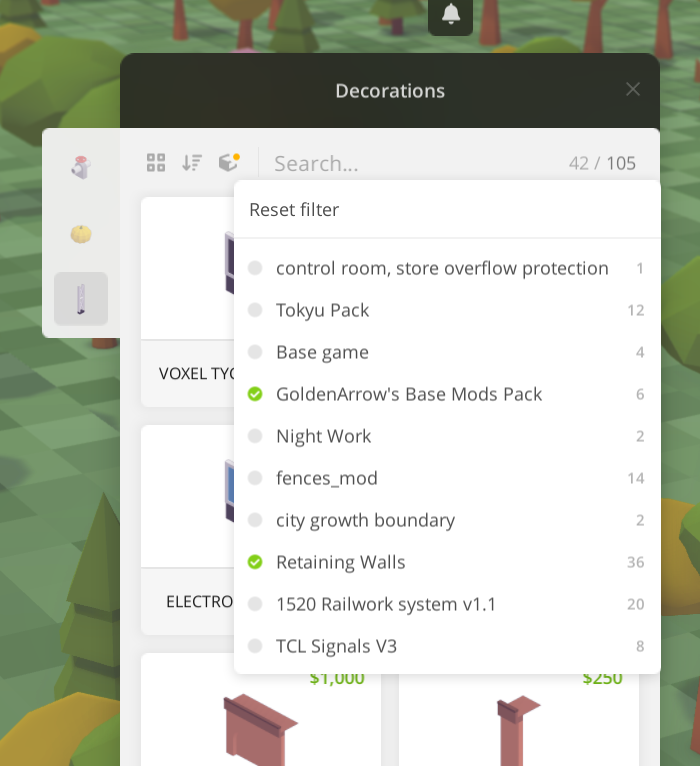 The new compact view option allows fitting the maximum amount of buildings into view for a quick glance. 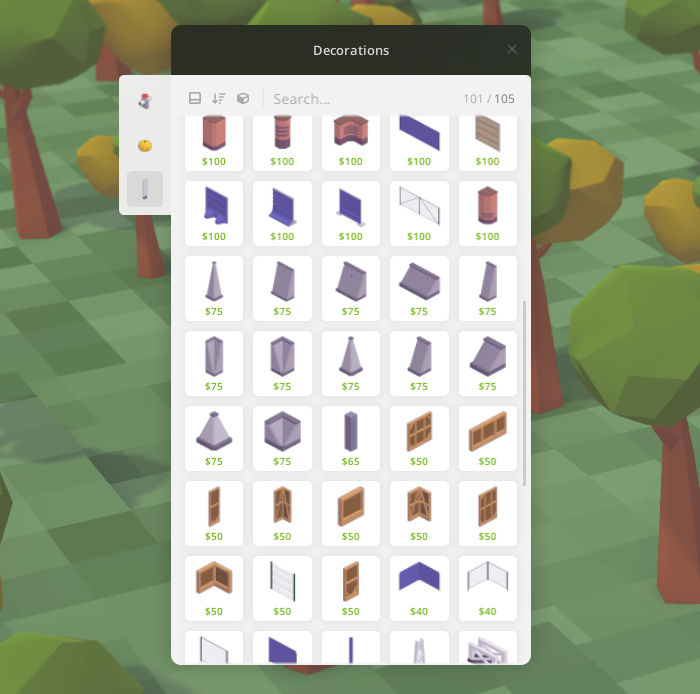 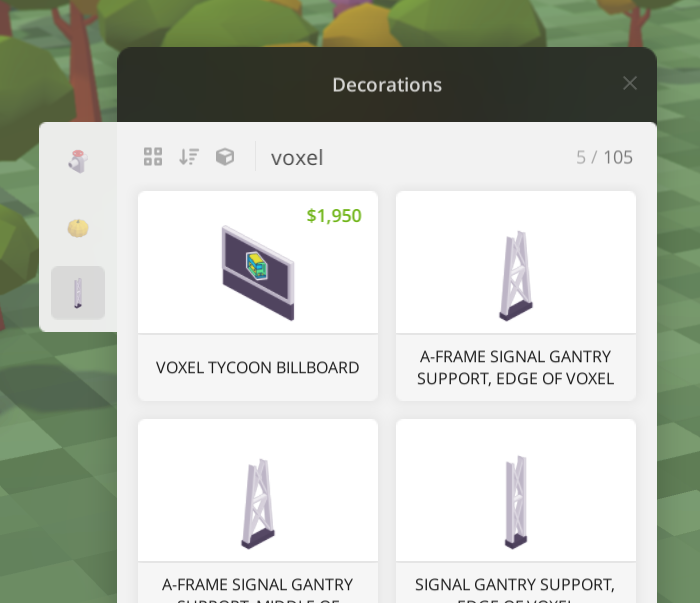 All of these features are available not only for decorations but for any type of building.

And the last thing: to help you keep track of where you’ve left the window now opens already scrolled to the last built object.

In this update, we’ve addressed the issue with misdirected conveyors. It was easy to mess it up and make conveyors face each other, blocking the flow of items. It was especially annoying when this happened just inside device inputs and outputs, because it’s really hard to stop, making players scratch their heads over why items not going in or out of the device.

We’ve addressed this in two ways.

First, we’ve greatly improved the direction auto-detection algorithm which decides in which direction the conveyor belt should move after build.

Second, we’ve added the easy-to-spot indicator that will pop up in the exact place of misdirection. Even more, just click on it and directions will be fixed automatically.

These changes should greatly reduce the amount of confusion and tedious work manually switching conveyor directions.

Another improvement allows you to build devices closer to each other without the need to demolish conveyors. 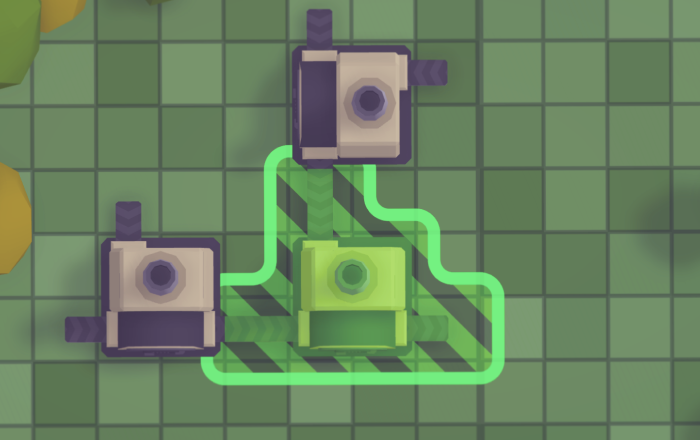 Search and toggle all mods when creating a new game

Sometimes you want to play a different set of mods or create a vanilla game with no mods at all. It’s already possible by toggling individual mods in the New game window.

However, if you have a really big amount of mods installed, toggling mods back and forth starts to be cumbersome. So we updated the Mods tab with a search bar and Toggle all options. 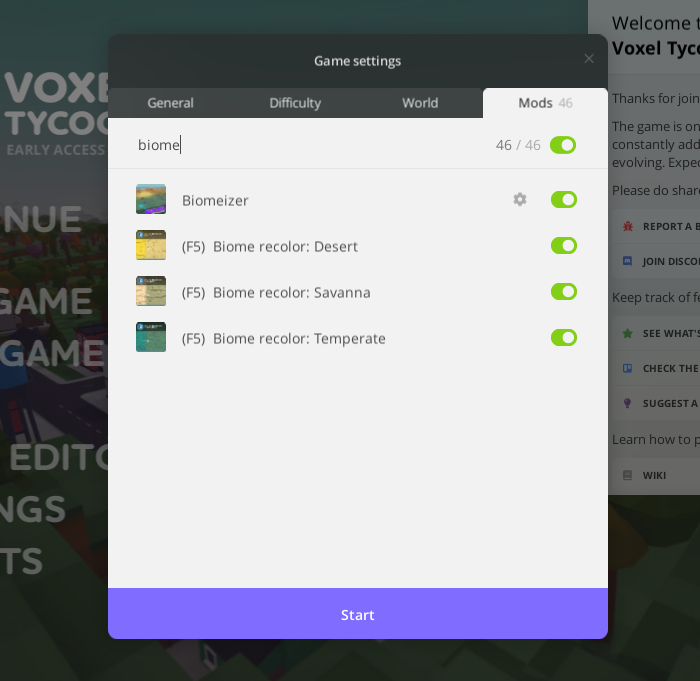 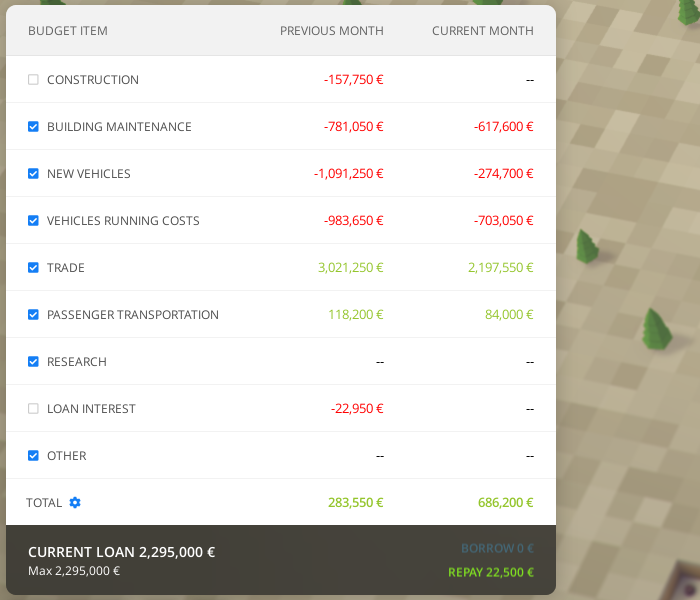 One-time money spending like laying out a long railroad or building a factory may affect the understanding of your current month-to-month balance. Now you can tune the total display for your needs by choosing what exact budget items should count in total numbers.

Distance to nearby signals 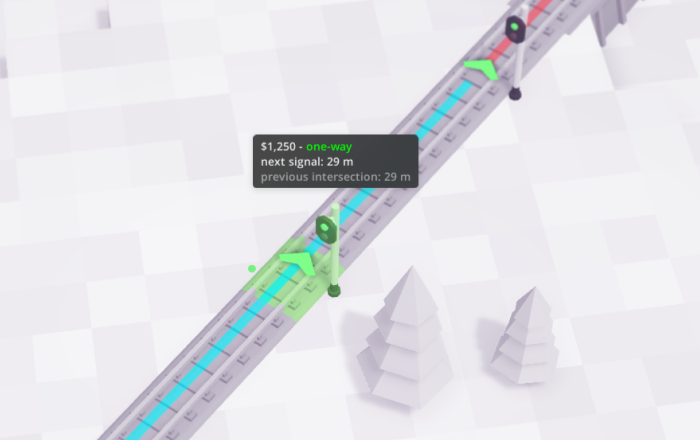 When placing signals, there’s a new option that will allow you to enable displaying a distance to the closest signal or intersection. Along with the already existing auto-placing feature, this should help to distribute your signals as desired. 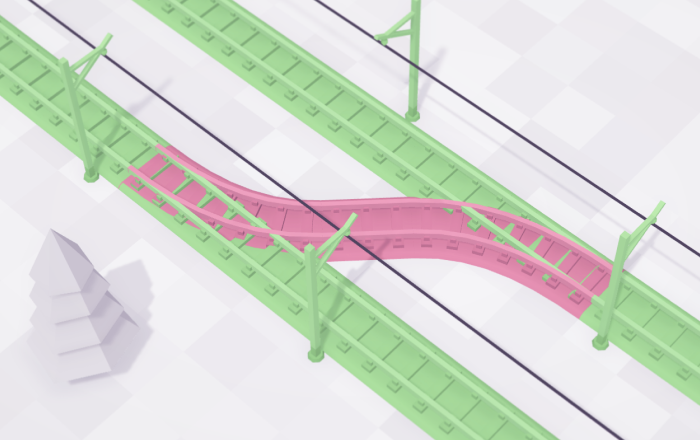 When using the electrification tool, non-electrified parts of the track will be highlighted in red. No more trains stuck because of 1 tile missing wires!

Besides the ability to mass send vehicles to depots and mass assign vehicles to a route, there’s a new action to mass-release vehicles from depots.

To accommodate more actions added, we’ve redesigned the actions area - and not only in a visual way. Now send and release actions behave as toggles and can be canceled if required.

Also, we’ve fixed how vehicles are sorted by their names. Now it should look like a human would expect.

This also applies to route names.

Replacements now can be paused - each separately, or all at once, for more precise control over your spendings.

Also, replacements now will preserve the vehicle’s cargo where possible, and we’ve fixed annoying notifications spam happening when a vehicle can’t find a depot for replacement.

Previously, if a mod breaks the game while it loads to the main menu, the game will just be stuck forever, until you unsubscribe from the problematic mod. And you are left to wonder which of your 100 mods collection is the bad one.

Now the game will detect such problems, and then show you a detailed dialog, letting you know what was happen, and suggesting actions based on context. 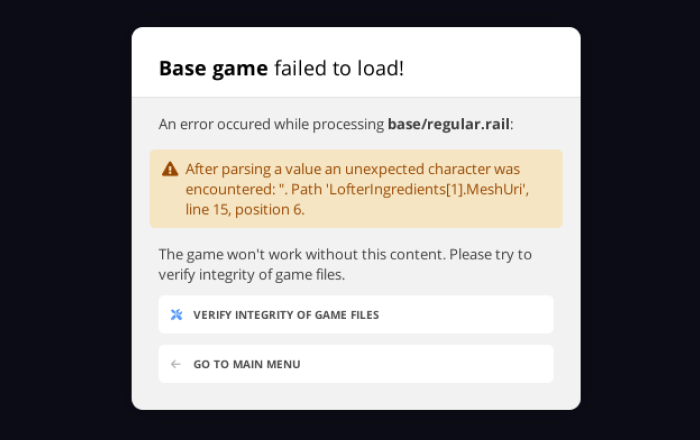 For example, it will allow you to just disable the problematic mod and restart the game, or go to the Workshop page to let the mod author know that there’s a problem.

By the way, the in-game bug icon got a promotion! Now, if an unexpected error will occur during play, the red banner will be displayed. Click on it will open a new developer console.

Yes, the game now has a developer console, which could be toggled at any point with Ctrl + `. It displays game logs in real-time and also will accept user commands in the future.

You can also disable the bug banner reappearing from there for the current play session.

There’s a new .categories asset that is used to organize buildings in the builder palette. Feel free to assign built-in categories to your assets, or even add your own categories. Also, let us know if you think some new categories should be added to the base game.

The direction of device inputs and outputs now should be explicitly set in assets. Please update your mods or they won’t work as expected.

You can now choose what pack to load in Asset Editor to significantly improve load times. 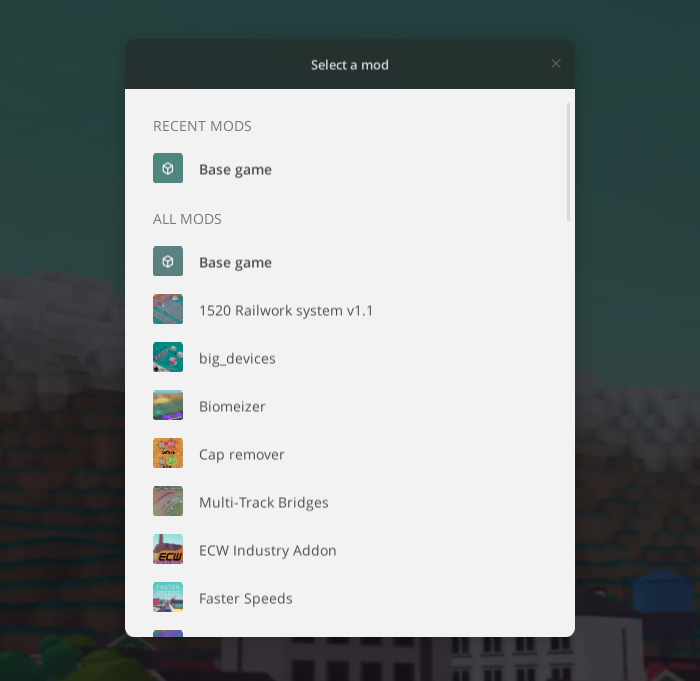 .decoration assets now can be animated in the same manner as devices or mines.

Previously, buildings technically could have not only point lights, but also spotlights. However, there was no way to set the direction where a spotlight is pointed, which made them pretty useless. Now, this is fixed.

This update is the minor one, but it brings a lot of useful improvements and fixes. We’ve covered the most important changes here, and if you want more, check the full changelog for this update.

In the meantime, we keep working on new gameplay features, and we hope to present them to all of you soon. Thank you and see you next time!